The splendid ORIENTALIST art that flourished in the salons of 19th century Europe has fascinated me for decades.  Lately I'd become more and more intrigued by the challenge of attempting such a painting myself. This summer, a private commission gave me the opportunity to do just that.

A Moorish Man-at-Arms was commissioned by a Baltimore collector who asked me to paint a single Arabic character in the iconic style of Orientalist masters Ludwig DEUTSCH and Jean-Léon GÉRÔME. 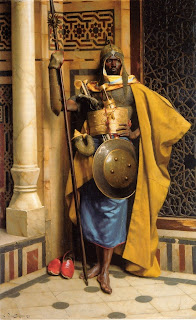 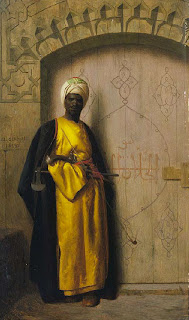 My work began with the subject research, pictorial design and thumbnail sketches that must be done in preparation for any successful painting.

The next step was to coordinate a photo shoot for creation of artist's reference from which to paint.  Suitable costuming, weapons and props were rented or fabricated, and a model engaged.  The yellow satin robe was central to my vision for the warrior's attire; part of my small costume collection, its picturesque quality impressed me the moment I spotted it in an antique shop years ago.

A university student from Philadelphia (with no prior theatrical experience) provided me with remarkably professional service as a model -- it was apparent from the first pose he struck that we'd succeeded in bringing the character which I'd known only in my imagination, to life!  My camera captured images that would have to substitute for the model's presence throughout the many, many long hours of painting to come.

The setting I conceived for this scene is the outer corridor of a mosque.  It is adorned with colorful and gracefully intricate enameled tile, so typical of the traditional Islamic decoration that I admire.  Included in the design is a detail of the "throne" verse (2:255) -- one of the central scriptures of The Koran.

The ornate carpet seen on the floor is my own -- a cherished gift from a friend who purchased it at a bazaar in Kabul, he presented to me upon his return from Afghanistan.

A comprehensive pencil drawing was prepared based on my sketches and the reference photos, and stabilized with fixative. 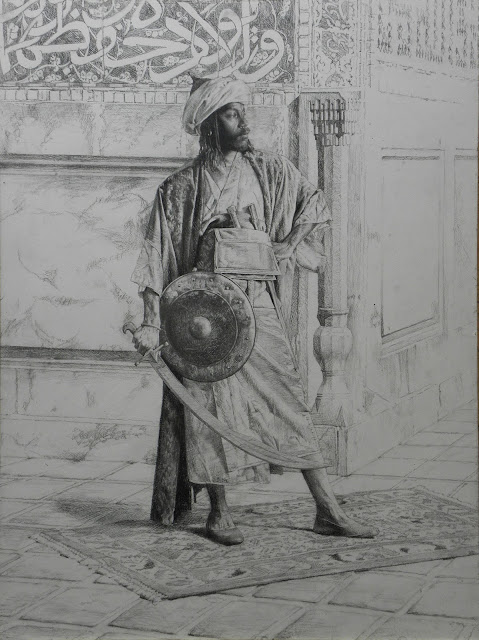 Before the painting phase could begin, an overall plan for color was worked out based upon the special properties of the light in the scene.  Keen observation from life is the only way that truly natural looking color can be determined.  Photographic color is often inaccurate and unreliable.  A thin imprimatura of burnt umber is washed over the drawing to give it a warm tone, suggestive of the final colors. 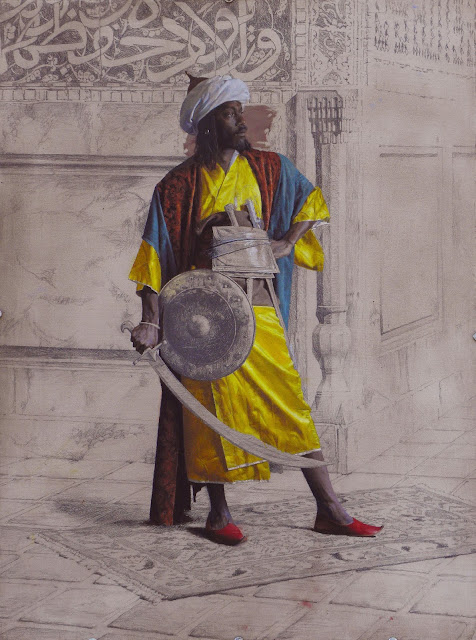 I prefer to paint the most important areas first, in this case the flesh and the yellow satin robe. Exacting work of this sort requires craftsmanship that cannot be rushed.  But, even the most careful procedure isn't foolproof.

As the painting developed I felt that some aspects of the combat arms and accoutrements were unsatisfactory (note the discrepancies between preliminary drawing and final painting).  Improvements were made that enhanced the design and exotic flair of the character.

Now that the figure was finished, colors for the background could be precisely keyed for harmony and convincing effects of chiaroscuro form and aerial perspective. 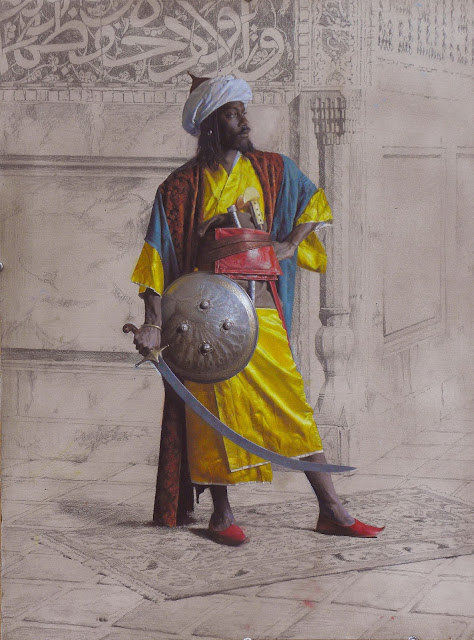 When completed, my patron was delighted with the painting, and I was satisfied that I'd achieved my goal.

Curious about privately commissioning a painting in the Orientalist tradition, or any other subject genre?  Please contact me at kenlaager@gmail.com.

at 12:03 PM
Email ThisBlogThis!Share to TwitterShare to FacebookShare to Pinterest

I have been an illustrator and gallery painter for 40 years. Yet, picture making remains as exciting for me today as it did when my career began.